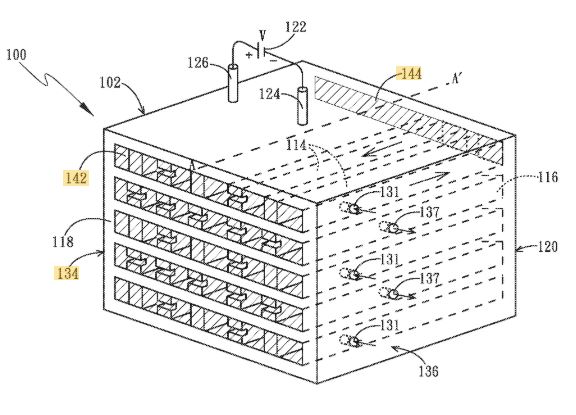 An oxygen generator having a honeycomb body composed of an oxygen ion conducting material is disclosed. The honeycomb body includes one or more air channels, each of which is composed of a plurality of the first channels and the first connecting holes therebetween to form a tortuous air flow path for lengthening the detention time of air, and oxygen collection channels, each of which is composed of a plurality of the second channels and the second connecting holes therebetween for oxygen passage. The first and second channels, which extend laterally through across the body and parallel to each other, are all sealed with glass members at both the front face and back face of the body. The source gas is provided and exhausted from one side face of the body to the other side face via a plurality of air inlets and air outlets, respectively, which laterally intersect the first channels. A power source are with a negative terminal and positive terminal, respectively, connected to the air channels and oxygen collection channels, respectively, to force oxygen ion flow across the oxygen ion conducting material such that gas in oxygen collection channels will become riches in oxygen than in air channels. The oxygen within the oxygen collection channels is collected from the side face of the body through a plurality of oxygen outlets which laterally connect with the second channels.